Here’s everything you need to know to plan a visit to the natural hot springs at Vanis Abano, including how to get there from Kutaisi or Vani.

What is the Vani sulfur pool?

Georgia is known for its hot sulfur springs and healing mineral waters that fill natural pools and feed spa resorts all over the country, from Tbilisi to Tskaltubo.

Like similar springs at Borjomi and Nokalakevi, the Vani Sulfur Pool is essentially an open-air bath fed by a sulfur water geyser. The official name, Dikhashkho Sulfur Geyser, comes from the village where the pool is located, part of Western Georgia’s Vani Municipality (south of Kutaisi).

What makes the Dikhashkho Sulfur Geyser special is its rounded shape, and it’s unexpected location. The pool is located in the middle of nowhere – literally in a field.

The surrounding landscape is very flat and looks out onto a small tributary of the Rioni River, which flows all the way from the mountains of Racha through Kutaisi to meet the Black Sea at Poti.

I’ve been told that there are similar springs all throughout this area, and that this particular sulfur geyser has been active for more than a century.

Sulfuric water gushes from a hose into two round pools formed by mineral deposits and shored up with bricks on one side.

The bottom of the pool is sand, while a cutaway on one side allows the water to spill out into the river. As a result, the water is constantly being replenished by the geyser.

The pool is naturally warm: Apparently temperatures average 40 degrees Celsius, around the same as the sulfur baths in Tbilisi.

It’s also a lot more sulfuric than anything I’ve experienced in Tbilisi, though – the odour is close to what I remember of Rotorua in New Zealand.

Sulfur has various healing properties and bathing in the hot springs is reportedly good for your cardiovascular health. After just a few minutes in the pool, the smell lingers on your skin (and on your clothes) for a full day. I don’t recommend putting your head under.

I’m not sure if the water is safe to drink, but we did see some people filling up a jerry can straight from the hose, so maybe it is!

Where is the Dikhashkho Sulfur Geyser located?

The sulfur pool is located in Imereti region near Dikhashkho village, roughly 33 kilometres (60 minutes’ by car) south of Kutaisi or 10 kilometres (20 minutes’ drive) from the nearest big town, Vani.

The exact location of the pool is marked here on Google Maps.

How to get to the Vani sulfur pool

If you have your own rental car, you can drive all the way up to the pools via an unpaved road that branches off from the Bagdati-Vani-Dapnari Highway. The turn-off point from the highway is clearly marked with this sign.

When the unpaved road ends, the last part of the route cuts across a field and is basically a dirt/mud track with some sizeable potholes.

We had no trouble tackling it in our Prius, but I do recommend you take it slow if you’re in a sedan. Larger vehicles and 4WDs will have no issue.

There is a cleared area for parking just before the pools, near the silver skip bin.

If you don’t have your own car, an affordable and efficient option is to organise a private round-trip transfer through GoTrip. From Kutaisi, prices start from 21 USD per car return (or 30 USD/car return from Baghdati). I recommend visiting the town of Vani and the Archaeological Museum at the same time.

When booking, add the sulfur pools as an extra destination in the notes section so that your driver knows you want to make a stop here.

→ Check prices and availability for a GoTrip transfer to Vani here.

Getting to the pools by minivan is more of a challenge, but it’s still possible. I recommend you depart from Vani and take a marshrutka bound for Baghdati – it should pass right along this highway. Alternatively, you can start from Baghdati and take a van bound for Vani.

You’ll need to jump out early on the highway, so make sure you have your GPS on to track your progress. When coming from Vani, you should reach the point where you get out of the van after about 10-15 minutes. From Baghdati, it should take around 25-30 minutes.

When you reach the turn-off, ask the driver to stop, pay (you still might have to pay the full fare, but it shouldn’t be more than a few GEL), and alight the van. Then walk the final 2-ish kilometres up to the pools. This should take you around 30 minutes. The path is all dirt and partially shaded.

To get to Vani from Kutaisi, take a marshrutka from the main bus station (3 GEL; 60 minutes). Vans depart when full every hour or so starting from 7am.

What time does the sulfur pool open?

As mentioned, the sulfur bath is located in an open field. There is no gate, thus the area is open and accessible 24/7.

I would recommend visiting during daylight hours as the final stretch of road is a bit rough. I didn’t see any street lamps in the area.

How much does it cost?

There is no fee for the Vani sulfur bath. Entrance is completely free.

Facilities are very basic: There are two wooden sheds (or more accurately, one-and-a-half) where you can get changed into your swimmers, plus a single picnic table. There are no toilets.

The closest shops are on the highway around Vani, so make sure you bring everything you need (including drinking water) with you.

What to bring with you

Important things to know before you visit the Vani sulfur pool

The sulfur pool is a lot smaller than we imagined. If you’re picturing a Pamukkale-style landscape with lots of pools over a large area, think again.

In reality there are only two small pools, one slightly deeper than the other. There’s really only room for a dozen or so people so you might feel a little cramped if there’s another group there.

We got lucky and arrived just as some friends from Belarus were heading off. As we were packing up, a Georgian family pulled in – so we had the baths all to ourselves for around 30 minutes.

Had a large group been there, I might have felt too shy to get in. There’s really nowhere to find privacy. Just something to keep in mind – and a good reason to arrive as early as possible.

We visited the pools on a Tuesday morning in July. We had aimed to arrive at 7am but because we took a wrong turn (my fault), we ended up arriving at 7.20am. It was already getting very warm by this time so I wouldn’t want to arrive any later than that.

From photos I’ve seen online, this seems to be a very popular sunset spot, so you’ll surely have to share the pools if you plan on being there for blue hour.

Another thing to note – and I’m sorry to have to write this – but there is rubbish everywhere around the pools. And I mean everywhere. Normally I consider Georgia to be a pretty clean place, but the amount of plastic waste here is repulsive.

Dozens of plastic bottles, chip packets, broken glass and torn pairs of undies were strewn all around the landscape. There’s a skip bin near the parking area, but apparently no one uses it. I really hope this improves over time as the site becomes more popular. Needless to say, please do not bring any single-use plastics into the area, and take your rubbish with you.

I didn’t realise it at the time, but as I was walking around taking photos I was also getting eaten alive by small insects. They weren’t mozzies, but the dozen or so bites I was left with all over my legs and abdomen turned out to be worse than mosquito bites. Some of them got quite swollen and turned to blisters a couple of days later. I still have small scars.

I don’t know if it’s because we were there in the early morning or if the bugs are always about because of the mud, but please be aware of this and bring your bug spray.

Other things to do in the area

The new Vani Archaeological Museum (which opened in late 2020) is a 20-minute drive from the sulfur pool and is absolutely worth visiting while you’re in the area. It’s open from 10am-6pm Tuesday to Sunday (closed on Mondays).

This is by far one of the best museums I’ve been to in Georgia – the signage is great and the staff are very attentive. The exhibits, mostly artefacts unearthed from the Colchic burial grounds the museum sits atop, are stunning. This is where you can see the original Tamada statue and many of the emblems replicated on the Colchis Fountain in Kutaisi.

Travelling in the opposite direction, the village of Baghdati is home to the Vladimir Mayakovsky House Museum and half a dozen family wineries. I’m yet to visit myself, but I’ll return with an update on things to do in Baghdati soon.

Final words: Is the Vani sulfur pool worth visiting?

Like Lailashi Secret Pool, the Dikhashkho Sulfur Geyser is a visually impressive and Insta-worthy spot that’s worth including on your Georgia travel itinerary – but only if you’re in the area. In my opinion it’s not worth going out of your way for, especially if you don’t have a car.

There are plenty of other sulfur pools you can bathe in around Georgia – they may be less rugged, but the baths at Borjomi and Nokalakevi are better-kept and cleaner.

More things to do in Imereti region Looking for the perfect place to stay in Georgia’s wine region? My guide to the best areas and accommodations in… 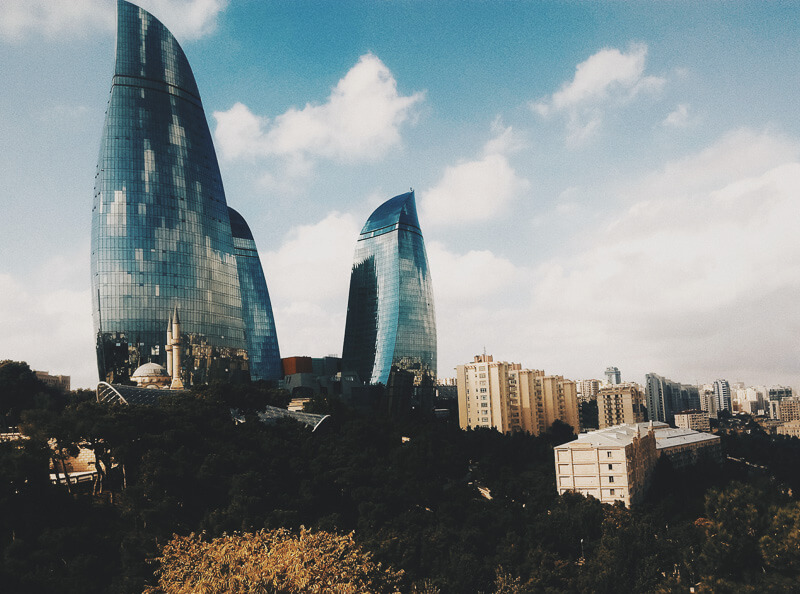 A complete guide to travelling between Georgia and Azerbaijan with the Tbilisi to Baku train. Please note: As of June… 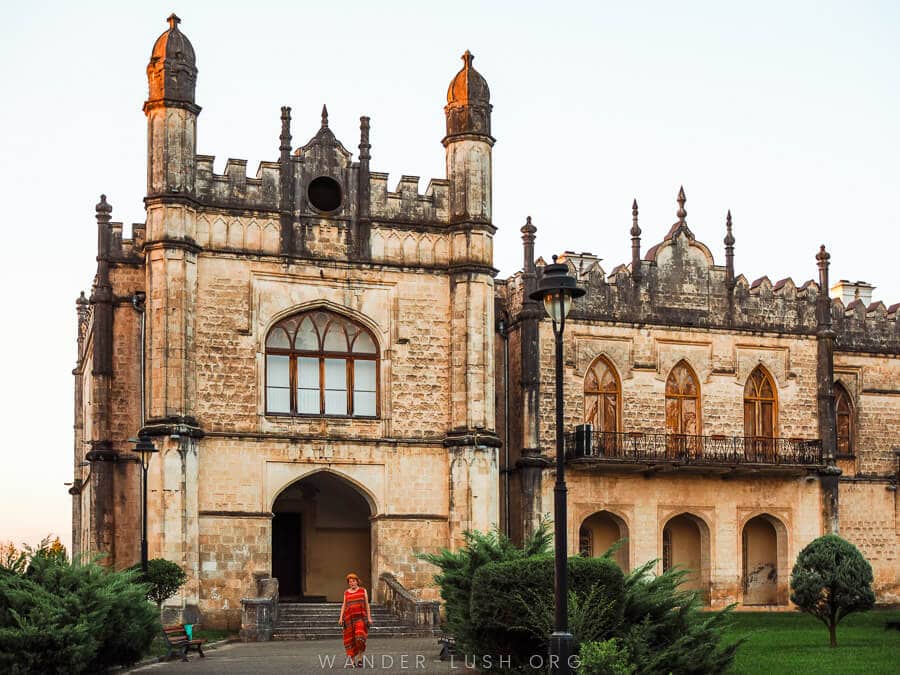 A comprehensive travel guide for Zugdidi, Samegrelo’s biggest city. Includes the best things to do in Zugdidi, suggested day trips,… Luxury camping has become hugely popular in Georgia over the past year or so, with numerous glamping resorts popping up… 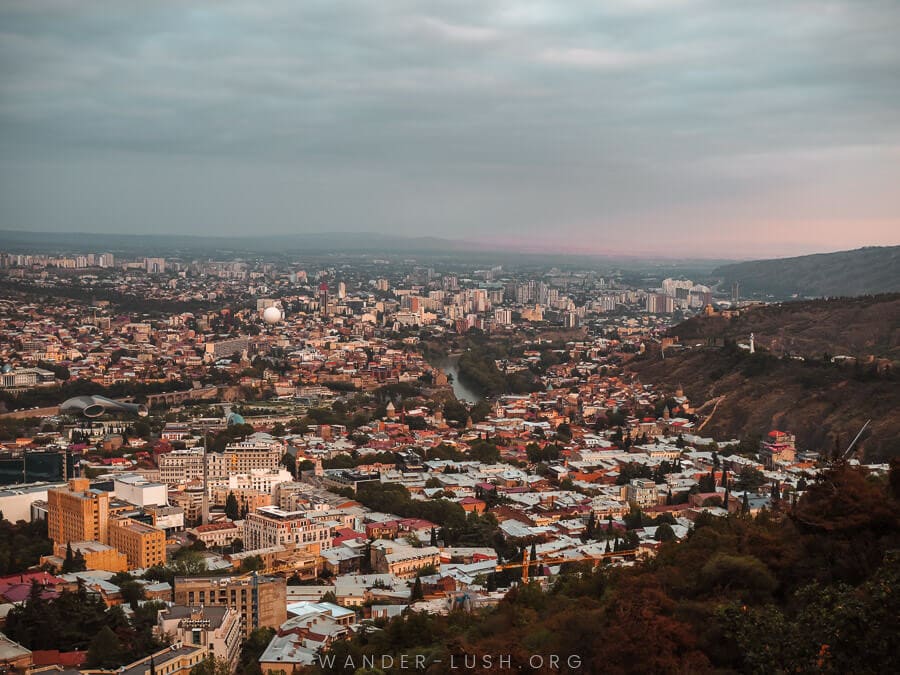 Everything you need to know to plan a visit to Mtatsminda, including directions for the Tbilisi TV Tower hike. Towering… 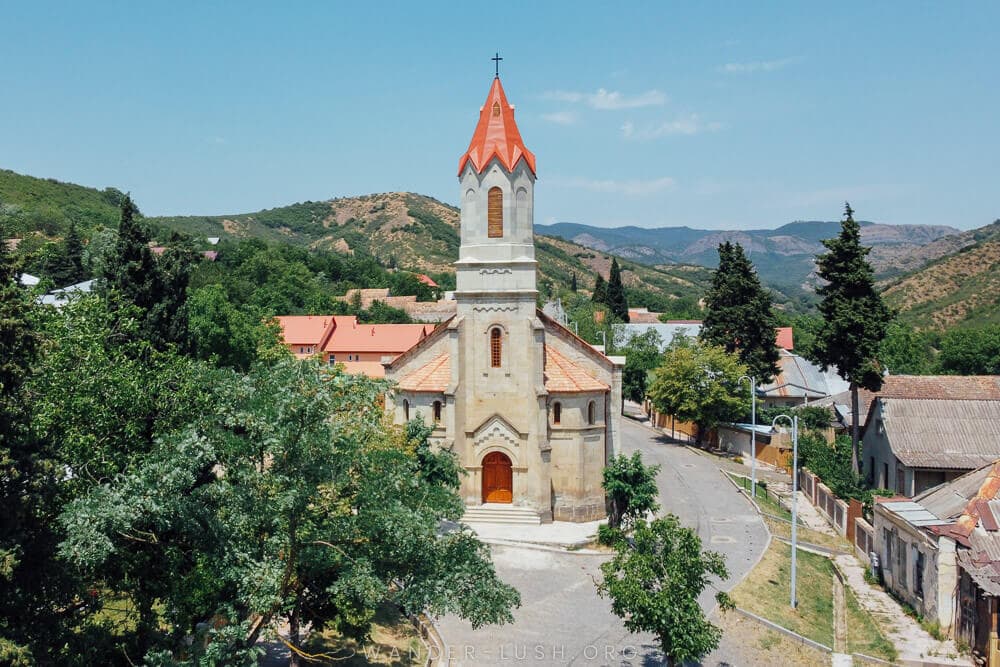 A guide to visiting Georgia’s historic Kvemo Kartli region, including things to see and do, accommodations, restaurants, a map, suggested…