Everything you need to know to plan a visit to Mtatsminda, including directions for the Tbilisi TV Tower hike.

Towering 300 metres above the city, Mtatsminda (‘Holy Mountain’) is the highest point in Tbilisi. The plateau is instantly recognisable for the Tbilisi TV Tower and Ferris Wheel (part of Mtatsminda Amusement Park) that sit on top.

Panoramic city views are the main attraction on Mtatsminda. There are other things to do in the area, including the Tbilisi TV Tower hike and visiting Mtatsminda Pantheon, one of my personal favourite spots in the city.

Throw in a plate of ponchiki donuts (you can taste the Soviet nostalgia) at the iconic Restaurant Funicular – and maybe a ride on the funicular – and a few hours on Mtatsminda has all the makings of a fun evening out in Tbilisi.

This quick guide to Mtatsminda covers everything you need to plan a visit.

A very brief history of Mtatsminda & the Tbilisi TV Tower

Mtatsminda is one of several peaks that form a natural buffer around Tbilisi and the valley. At the turn of the century, plans to construct an ‘upper Tbilisi’ on the Mtatsminda plateau started forming, and a funicular railway was constructed to link the two parts of the city.

The scheme never eventuated, however (something about running water pipes uphill?), and in the late 1930s, a landscaped park was added to the plateau instead. Restaurant Funicular was built around this time and for many years served as one of the city’s top eateries.

In 1972, the most recognisable feature of the city skyline, the Tbilisi TV Tower, was constructed nearby. It replaced an older 1950s communications tower, which was transplanted to Gori.

Then in 2007, a local philanthropist sponsored the construction of Mtatsminda Park, a large amusement complex complete with an 80-metre-high Ferris Wheel.

Restaurant Funicular was refurbished in 2014, and there are now plans to further develop Mtatsminda and open the TV Tower up to the public for the first time.

Planning your visit to Mtatsminda & the Tbilisi TV Tower

One way to reach Mtatsminda from the city is by hiking the Tbilisi TV Tower trail. This is a rough, partially unmarked track that takes about 40 minutes to complete.

The terrain is uneven and it’s quite steep and rocky in places, but it’s not overly challenging. Good walking shoes are definitely required. I don’t recommend doing this hike after heavy rain – I imagine it gets quite muddy.

The hike starts from the Church of Mikhail of Tver, 350 metres behind Rustaveli Metro Station. To access the trailhead, cross the street from the church and take the concrete stairs (represented by the green dotted line on Google Maps).

The first section is paved, but it quickly becomes an off-road scramble through brush. There are a number of different ‘paths’ to choose from – we just picked one that looked like it was veering uphill and hoped for the best. The TV Tower eventually comes into view so you can’t go too wrong.

The views from this side of the mountain are a bit different: instead of looking over Old Tbilisi, you see Rustaveli, Diamo Stadium and Digomi (characterised by huge Soviet-era housing blocks) in the distance.

As you near the top of the mountain, you pass through a patch of pine forest and an outdoor gym. The final stretch of the hike brings you directly to the foot of the TV Tower.

From the tower, it’s a short walk to reach Mtatsminda Park. Follow the TV Tower fence line in the direction of the Ferris Wheel then duck under the fence at the marked spot.

This is the shorter of two hiking routes that lead to Mtatsminda, the other more adventurous route being from Turtle Lake.

Essential reading: 15 best hikes in and around Tbilisi.

I much prefer this alternative walking route for several reasons: it’s entirely paved and easier to navigate, the city views are nicer, and it goes right through Mtatsminda Pantheon. If you hike up the TV Tower trail, you can always come back down via the Pantheon to make a tidy loop.

This path starts from Sololaki, just north of the Lower Funicular Station. Start by following Mama Daviti Rise – a steep, winding street with a pedestrian path and benches – all the way up to the church.

Mtatsminda Pantheon is located in the church yard (more on this later). There are a number of viewing platforms here as well and some seats.

After you’ve visited the Pantheon, the trail continues on the far left between the gift shop and the toilets. The next part is a combination of stairs and steep pathways through a shady forest. At one point you walk directly under the funicular track which is pretty cool. Eventually you pop up in the carpark near Restaurant Funicular in the heart of Mtatsminda Park.

This route takes slightly longer – budget at least an hour to get up.

How to get to Mtatsminda without hiking

If you’re not up for either of the hiking trails, there are several other ways to reach Mtatsminda from the city centre.

Designed by a Belgian engineer, the Tbilisi Funicular made its maiden voyage up Mtatsminda in March 1905. It took some convincing at first – apparently the owners had to pay people to ride the 500-metre-long ropeway.

Board at the Lower Funicular Station, a beautiful brick building with arched windows and deco details. The ride to the top takes around 8 minutes. There is one stop along the way at Mtatsminda Pantheon (only open between 10am and 7pm).

To ride the funicular, you need a special rechargeable Mtatsminda card (cash isn’t accepted, and the regular transport card you use for the metro wont work). The card itself costs 2 GEL (non-refundable). A ride to Mtatsminda will set you back 8 GEL one-way. Note that if you do want to stop at the Pantheon, you will be charged again.

If you don’t want to spring for the funicular, you can easily reach Mtatsminda Park by city bus for the regular 1 GEL fare.

Once you reach the crest of the hill, the station you want is located at the roundabout near the carpark (see the exact location here). From there, it’s a short walk to the park and restaurant.

A taxi to Mtatsminda from Freedom Square costs around 13 GEL when booked through Bolt.

I highly recommend picking up a local sim card so you can use the app on the go.

Things to see & do on Mtatsminda

Once you’ve made it up to Tbilisi’s highest point, here’s what you should see and do.

Berlin has the Fernsehturm, Belgrade has Avala, and Tbilisi has the Tbilisi TV Tower. Built in 1972 to replace an older structure from the 50s, this 275-metre-tall communication tower has long been the city’s north star.

There are plans to open a viewing deck and a restaurant inside the TV Tower, but for now, it remains closed to the public. It’s fenced off along the bottom, but you can stand almost directly below for an up-close view.

One of the top reasons to visit Mtatsminda is of course for the panoramic city views you get from the top. It’s not my favourite viewpoint in the city, but it’s spectacular nonetheless.

A huge viewing deck stretches along the front of Restaurant Funicular like a balcony over the city. You can easily spot just about every major Tbilisi landmark, including Sameba Church and Narikala Fortress in the distance.

I’ve been up here for sunset dozens of times in winter, spring and fall, and the lightshow is always pretty special no matter the time of year.

Restaurant Funicular, the large Soviet-style building at the top of the funicular track, was once the city’s most prestigious venue. When politicians visited Tbilisi, this is where they were wined and dined. Meanwhile, everyday Tbilisians made a tradition out of visiting the cafe on the bottom level.

The thing to order here is ponchiki – light, puffy donuts filled with sweet custard. I always assumed ponchik(i) were Armenian because I first tried them in Gyumri, but apparently they’re eaten all over the region (a leftover from Soviet times).

For something more substantial, you could try the restaurant on the upper level. (It’s quite flashy so maybe don’t come here after the hike!) The third level is an event space.

Restaurant Funicular, including the cafe, is open daily from midday until 11pm (11.30pm on weekends).

Majority of the plateau is taken up by Mtatsminda amusement park, a large complex of carnival rides, performance areas and concession stands.

You might need a few shots of chacha before you jump on the Ferris Wheel (trust me), but the view from the top is breathtaking. It only costs a few GEL to ride – purchase coupons from the ticket booth first.

Mtatsminda Park is open Monday to Friday from 11.30am and weekends from 11am.

If you’ve been looking for Tbilisi’s much-Instagrammed ‘upside-down’ houses, you’ll find them here in Mtatsminda Park. I didn’t notice them until my third or fourth visit.

The Pantheon and church are located on the lower part of the hill, below the park. This is one of my favourite spots in the entire city and a must-see if you’re in the area.

Officially the Mtatsminda Pantheon of Writers and Public Figures, this park is the final resting place of some of Georgia’s most celebrated national writers, artists and scholars.

It was established in 1929, but many of the graves date back long before that. Russian author Alexander Griboyedov was the first to be buried here and many tombstones were relocated later. Politicians, dissidents, historians and other prominent figures have also been awarded a place in Tbilisi’s most beautiful cemetery over the years.

The Pantheon is filled with unique, flamboyant sculptures – it feels more like an outdoor sculpture park than a cemetery.

Amongst the headstones, you’ll also find a symbolic grave for Pirosmani, Georgia’s most beloved painter whose real burial place is unknown.

The gates to the Pantheon and churchyard are open between 10am and 7pm. Daily mass is held at St. David’s, so be respectful if there’s a service taking place during your visit.

Behind the church, there’s a stone passageway and water spring that are quite interesting too.

Where to stay in Tbilisi

Tbilisi has a good range of hostels, family run guesthouses and charming boutique hotels to choose from. If you’re still trying to decide which district to stay in, you can find my detail Tbilisi neighbourhood guide here.

For even more inspiration and resources, check out my new Georgia Travel Guide and my Georgia itinerary. 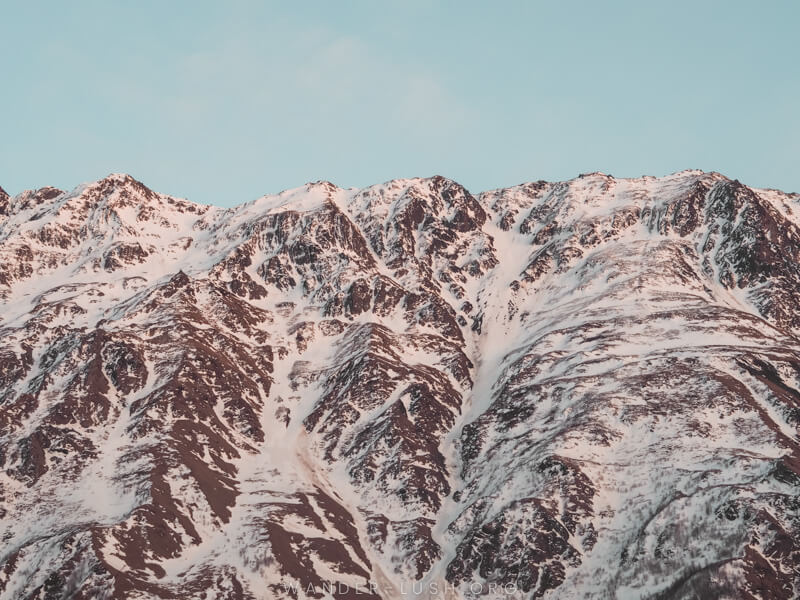 No trip to Georgia would be complete without a visit to the Greater Caucasus, the mountain range that forms a… 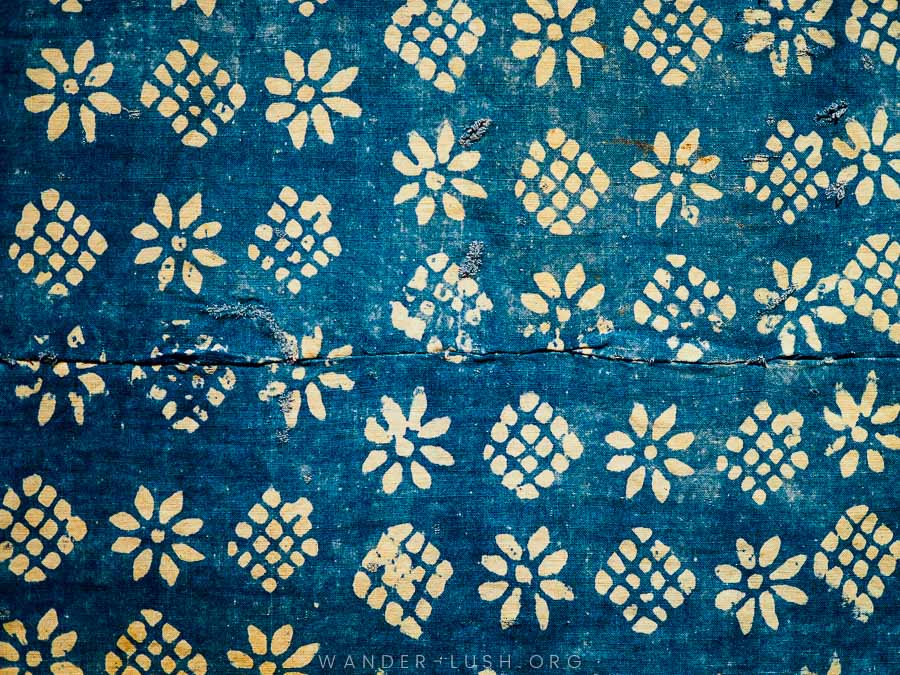 If you’re an admirer of traditional textiles, crafts and handmade objects, you’ll find travelling in the Trans-Caucasus countries (Georgia, Armenia… 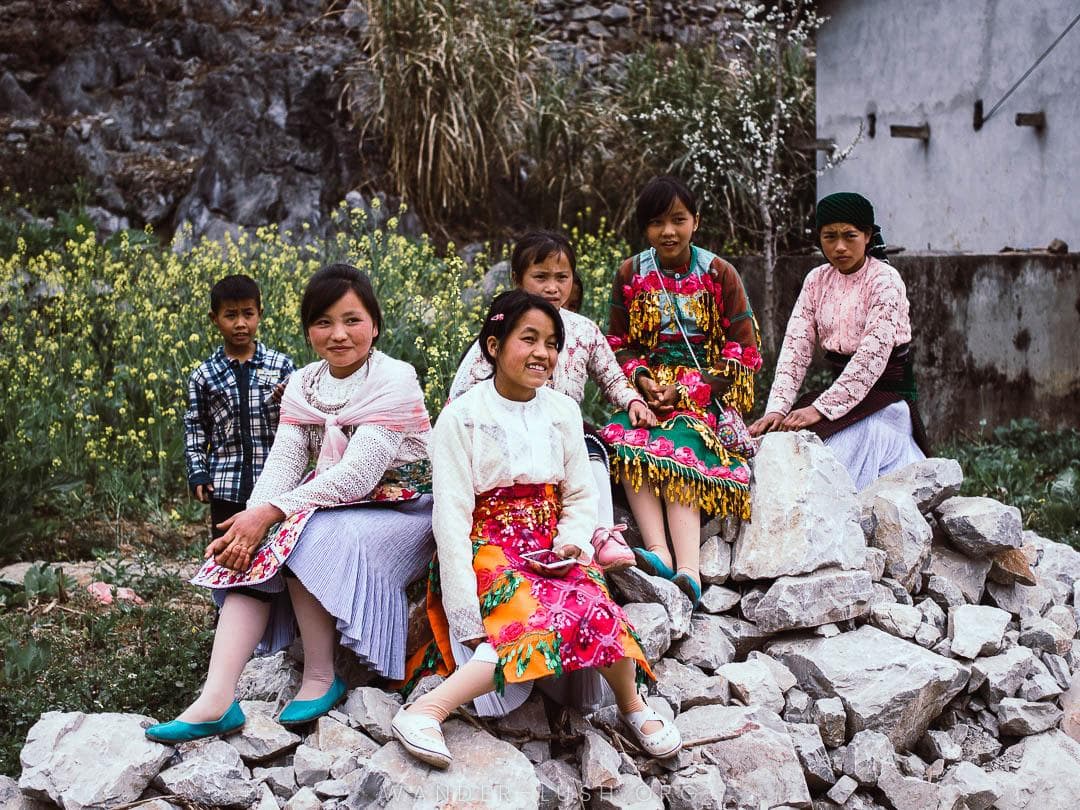 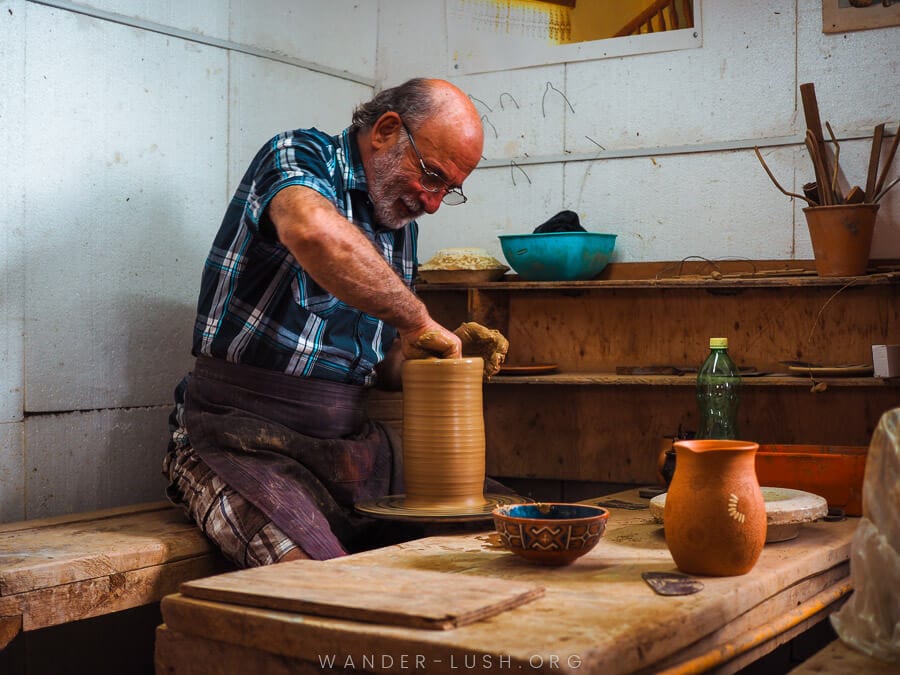 Robert Absandze is one of Georgia’s most respected ceramicists. In his native Zugdidi, you can spot his distinctive red and… 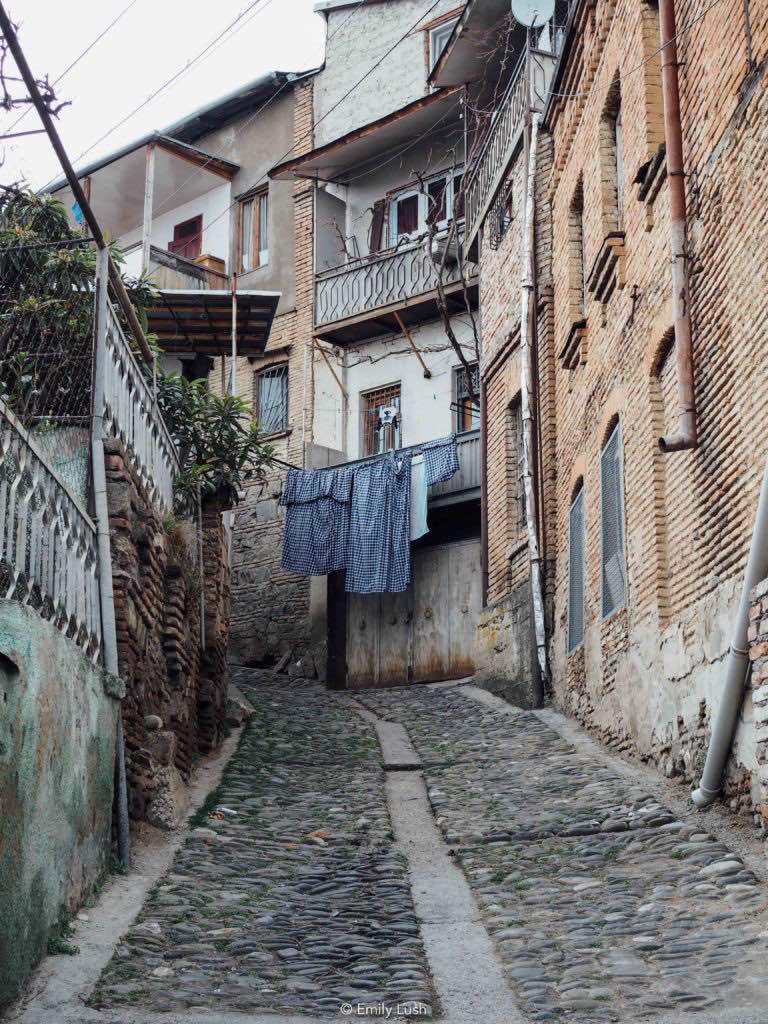 Most first-time visitors to Tbilisi will understandably gravitate towards the Old Town. It’s a great place to start, but there’s… 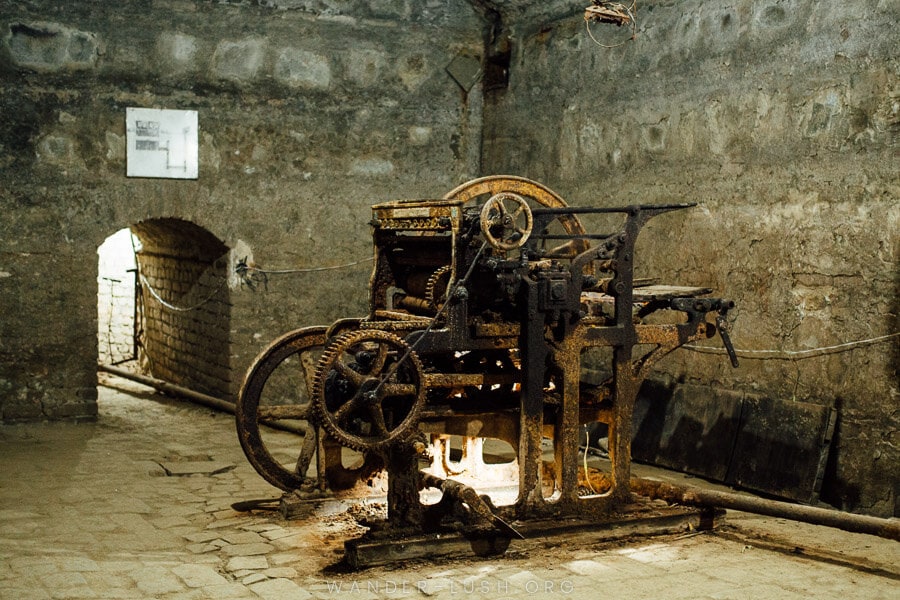